Natives and Drinking Water Under Attack in North Dakota

Standing Rock, North Dakota, U.S. - A large force of militarized police, mainly employing clubs and less deadly weapons such sound cannons, chemical irritants, etc. attacked an indigenous camp in the path of a corporate pipeline. Police on ATVs targeted natives on horseback with rubber bullets and less lethal explosives leading to the death of one horse. Police who had to be brought in from a number of neighboring states, were backed up by National Guard troops.

Last Thursday an armed employee of the Dakota Access, the company behind the planned $3.7 billion, pipeline, was caught attempting infiltrate the water protector's camp. Over the weekend a mysterious brush fire was set in the vicinity of the camp. It's believed that the fire was set by employees of the company.

More than 200 water defenders have been arrested over the last few days and sent to jails throughout the state. The struggle to stop the Dakota Access Pipeline (DAPL) and defend the water that could easily be contaminated by a leaking pipeline, continues and calls have gone out for supporters to join the ongoing camps and to plan and execute solidarity actions in other locations.

For those interested in joining the struggle in North Dakota please visit these sites for more information:
http://facebook.com/redwarriorcamp
http://sacredstonecamp.org
http://mississippistand.com

Recent solidarity actions have targeted some of the banks funding the pipeline project such as TD Bank in Montreal and CitiBank Headquarters in San Francisco. In Brooklyn, NY, indigenous youth brought pressure to wannabe president Hillary Clinton by taking over the lobby of her campaign headquarters and erecting a teepee. Apparently oil pipelines, which frequently rupture destroying eco-systems and water supplies, are also easy to safely disrupt. 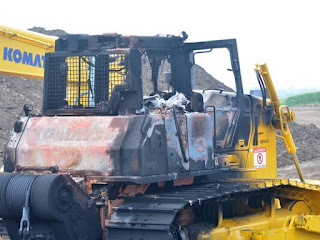 In August, and again just a few weeks ago, a series of suspicious fires left a number of bulldozers, backhoes, and other heavy equipment used to construct the pipeline inoperable. The heavy machines were located along the pipeline route in two Iowa counties. Individuals opposed to the construction of the DAPL are believed to be responsible. Police have estimated the costs of the fires at approximately $3 million, not including the cost of delays to the company.

Stay up to date on this struggle and follow:
UNICORN RIOT
subMedia.tv and
Democracy Now!