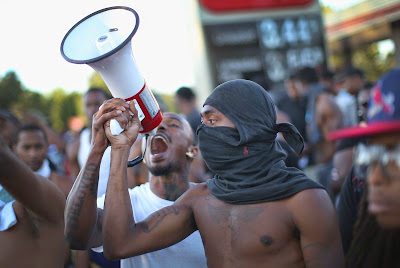 Ferguson, Missouri, U.S. - The people of Ferguson Missouri have shown that when there are riots, when business as usual is disrupted, the world takes notice. Five days ago an unarmed black male teenager named Michael Brown, due to begin college next week, was harassed by police and subsequently gunned down in the streets while holding his hands in the air. Since then the good people of Ferguson, a small municipality in St. Louis County, have not let the world forget that. The rage they are expressing is not only for Mike Brown, but for everyone who has lived under the eye and the boot of an increasingly militarized surveillance and police state.

Protesters have engaged in violent conflict with police and or destroyed property (including a liquor store) each night since the teen was murdered. The city of Ferguson is two thirds black, but it's 50-person police force has only 3 black officers. This discrepancy is prevalent among area elected officials as well and makes it clear just how entrenched the institutionalized racism is in the area. Police are refusing to release the name of the officer who murdered the teen and have begun to attack journalists with "less lethal weapons" such as beanbag rounds and gas. 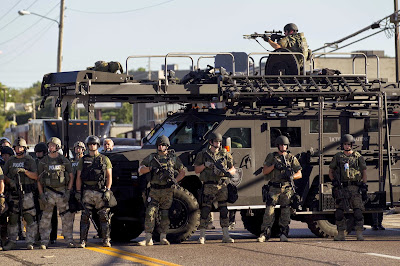 The militarized and heavy handed police response in Ferguson hasn't just been targeted at journalists. Demonstrators have been confronted by very well armed and equipped police in unworldly looking riot control gear and firing "flash bang" bombs and gas at citizens. 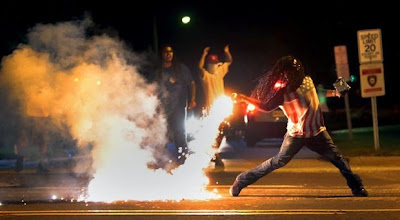 The social unrest and disturbances aren't the only reason this case has become an international news story. It follows on the heels of a large number of instances of police brutality, many of which cases have been caught on camera and made national headlines. The ubiquity of smart phones with the ability to record and share images quickly and increased use of lapel cameras by police has greatly increased the visibility and awareness of how the police operate day to day when dealing with dis-empowered low income or minority communities. 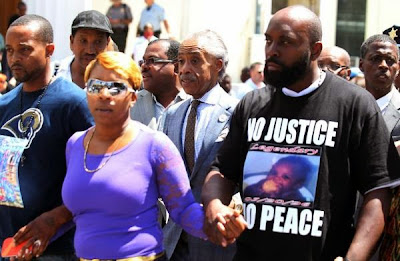 The victim's family spoke to the press saying they don't want to see violence but at the same time Mike Brown's father's t-shirt proclaimed "NO JUSTICE / NO PEACE." The implication is clear that if the situation does not change there will be violence, or at least the threat of it until it does. Of course the elite, professional-recouperators of "the black community" like Al Sharpton have tried their best to neutralize and suppress people's justifiable anger and channel it into pointless and well controlled activities. 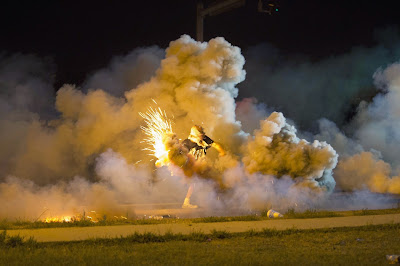 Others have called for support for the dozens who have already been arrested standing up to the police in Ferguson and solidarity actions have been planned for tonight in various cities. As of today municipal police have been ordered to step down in Ferguson and the governor has called in the Highway Patrol headed by a black police officer in hopes of quelling the violence.