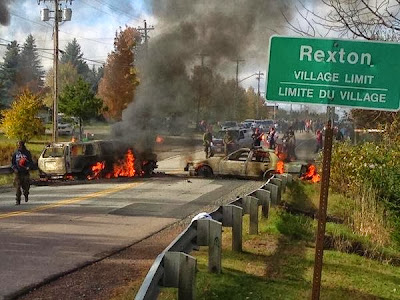 Mi’kmaq Territory, New Brunswick, Canada - RCMP (Royal Canadian Mounted Police) officers met with serious resistance after making an effort to clear a highway blockade, that targeted a company trying to exploit resources under their tribal lands by hydraulic fracturing (commonly known as fracking.) The blockade was a joint effort of Mi’kmaq tribal members and warrior society, Acadians and people from local anglo-speaking communities, who are rarely unified. The blockade had continued peacefully for weeks until the heavily armed and militarized police forces were ordered to step in and protect the interests of SWN Canada, a subsidiary of the Texas based South Western Energy company.

Yesterday the blockade was attacked by police who fired potentially deadly "less-lethal ammunition" and used pepper-spray on protesters; the attack was met with molotov cocktails, and later five police vehicles were torched. In all 40 demonstrators were arrested and no serious injuries were reported. According to authorities the local RCMP office on First Nations land itself came under attack and there was an attempt to burn it down.

According to SWN the blockade was costing them upwards of $60,000 per day. Dozens of solidarity blockades along highways and other demonstrations have taken place or a scheduled throughout North America, and beyond.