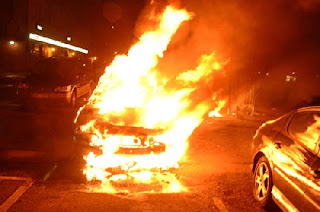 Stockholm, Sweden - Rioting spreads into a fourth day since police fatally shot a 69-year-old mentally ill man in an immigrant neighborhood. "Youths" are being singled out as being largely responsible and are said to be motivated by a lack of hope in the future, racism, and joblessness. Sweden has been scaling back it's social welfare programs since the 1990s, leading to the enormous increases in economic inequality, at a greater rate than in any other advanced economy. 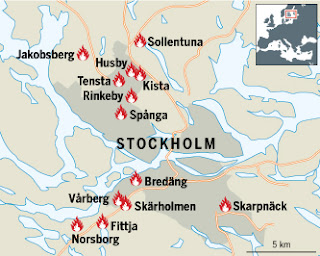 Disturbances of this sort are nearly unknown in Sweden, and certainly are on this scale. What began as rock throwing at police in the Husby area, where the shooting occurred has escalated. More than a hundred cars being set alight and then even a number of state buildings including two schools. A police station in the suburb of Jakosberg area was also attacked. Rioting has spread to more than a dozen Stockholm neighborhoods.