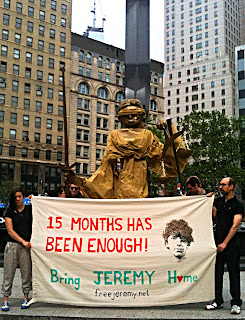 New York, New York - Jeremy Hammond, the Chicago-based Anonymous and LulzSec affiliated hacktivist has accepted a non-cooperating guilty plea agreement for his role in hacking numerous state and private police and security related websites. Jeremy for the first time stated that he was responsible for these acts. He did so with his fist raised in the air before Judge Loretta A. Preska in a lower Manhattan Federal courtroom. He may ultimately be sentenced to as many as 10 years in prison and be ordered to pay more than $2.5 million in fines and restitution for his non-violent crimes. A sentence of that severity is many times more what his co-defendants in U.K. have been sentenced to.

The  U.S. State Attorney's Office made a statement on the case in an effort to malign Jeremy as someone simply focused on chaos and to imply that he was motivated by financial gain‽ They even attempt to deny that he was "fighting for an anarchist cause" as if anarchists should reject Jeremy as some sort of 'bad anarchist!'

The information Jeremy and his co-defendants retrieved from these sites was forwarded to Wikileaks, so that it could be released freely to the public. These hacks were not done for personal gain. Jeremy was arrested by FBI agents in early March of 2012 thanks to the aid of fellow hacker turned snitch Hector Xavier Monsegur a.k.a. "Sabu." Monsegur helped execute a computer attack against Strategic Forecasting, Inc. or Stratfor with the support of the FBI who were seemingly more interested in making a big case than protecting the so called victims of this hack.

It is possible that Jeremy could be released after his September 6th sentencing date with time served. It is more likely that this may happen if Jeremy's supporters demand it! 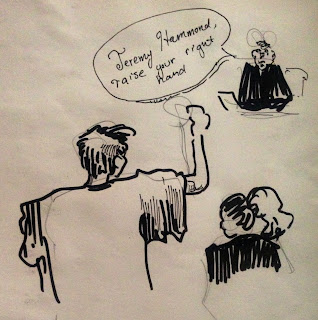 Today I pleaded guilty to one count of violating the Computer Fraud and Abuse Act. This was a very difficult decision. I hope this statement will explain my reasoning. I believe in the power of the truth. In keeping with that, I do not want to hide what I did or to shy away from my actions. This non-cooperating plea agreement frees me to tell the world what I did and why, without exposing any tactics or information to the government and without jeopardizing the lives and well-being of other activists on and offline.

During the past 15 months I have been relatively quiet about the specifics of my case as I worked with my lawyers to review the discovery and figure out the best legal strategy. There were numerous problems with the government’s case, including the credibility of FBI informant Hector Monsegur. However, because prosecutors stacked the charges with inflated damages figures, I was looking at a sentencing guideline range of over 30 years if I lost at trial. I have wonderful lawyers and an amazing community of people on the outside who support me. None of that changes the fact that I was likely to lose at trial. But, even if I was found not guilty at trial, the government claimed that there were eight other outstanding indictments against me from jurisdictions scattered throughout the country. If I had won this trial I would likely have been shipped across the country to face new but similar charges in a different district. The process might have repeated indefinitely. Ultimately I decided that the most practical route was to accept this plea with a maximum of a ten year sentence and immunity from prosecution in every federal court.

Now that I have pleaded guilty it is a relief to be able to say that I did work with Anonymous to hack Stratfor, among other websites. Those others included military and police equipment suppliers, private intelligence and information security firms, and law enforcement agencies. I did this because I believe people have a right to know what governments and corporations are doing behind closed doors. I did what I believe is right.

I have already spent 15 months in prison. For several weeks of that time I have been held in solitary confinement. I have been denied visits and phone calls with my family and friends. This plea agreement spares me, my family, and my community a repeat of this grinding process.

I would like to thank all of my friends and supporters for their amazing and ongoing gestures of solidarity. Today I am glad to shoulder the responsibility for my actions and to move one step closer to daylight.