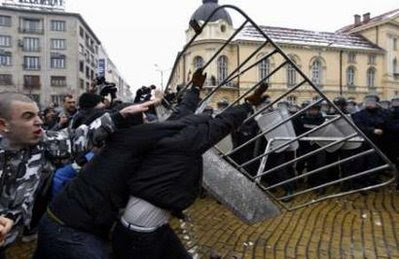 Sofai, Bulgaria - The first day in what was planned to be three consecutive days of mass anti-government protests ended in rioting after police and demonstrators clashed outside of parliament building. Yesterdays demonstration was similar in many ways to the prior days protests in Latvia. The thousands of participants are upset about their grim economic future.

Demonstrators threw rocks, cobblestones and barriers at police who attacked the crowd indiscriminately with clubs. As the square outside of the parliament building was cleared a number of shops were vandalized and looted and police cars and city buses damaged.