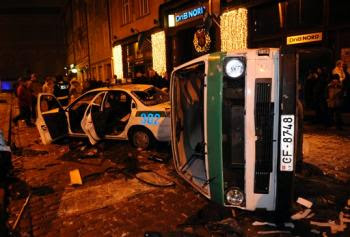 Riga, Latvia - Hundreds of anti-government protesters spurned on by the growing economic crisis attacked police and government buildings in the historic Old Town district of the capital today. The demonstration was not the first of it's kind in recent months but it was the largest and most unruly the country has seen since the dissolution of the Soviet Union in 1991. Last month Latvia was given 7.5 Billion Euro by the IMF in an attempt to ease their economic crisis.

Three police officers were injured and 97 protesters detained. Authorities are now seeking to identify prosecute the organizers who explicitly called for the demonstrators to bring pitchforks to use as weapons and to prepare to violently overthrow the government. Rioters attacked police with rocks, cobble stones, sticks, and miscellaneous projectiles. Protesters chanting "dissolve parliament, dissolve parliament" overturned a police van and set it on fire, and broken windows at the Finance Ministry.