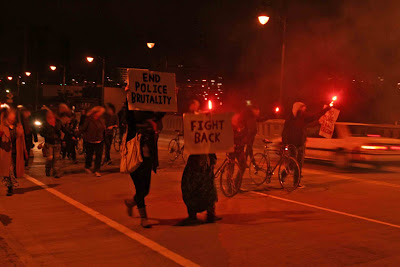 Olympia, Washington, U.S. - An anti-police march threw torches and stones at a police station in Olympia on Friday. Around 40 people participated, some carrying road flares and torches, others carrying signs reading "Liar, liar, cops on fire" and "Fire all cops, all cops are murderers."

Participants were angered by the recent police killings of Alex Grigoropoulos, Oscar Grant, Miles Allen Murphy, Olympia local Jose Ramirez-Jimenez, and the police in general. Inspired by the appropriate responses in Greece and Oakland, the march started at a library re-opening downtown and then crossed the 4th Ave. bridge to the Westside of Olympia, blocking traffic. Some screamed "Fuck the Police!", "Beneath the Concrete Lies the World of Our Dreams" and "Destroy Misery," but overall there was little chanting.

Approaching the police station, a dumpster was overturned in the street, blocking the tailing police cruisers. The crowd then surged towards the station, pelting it with stones and hurling torches before dispersing into the surrounding neighborhood, reportedly setting off fireworks and breaking at least one cop car window in the dispersal process.

Police drew guns and arrested three people for minor misdemeanor charges and detained about 20 people temporarily. About ten officers responded, and Police Commander Tor Bjornstad stated that due to the "changing nature of Olympia protests," more officers are made available to respond to these kinds of demonstrations.