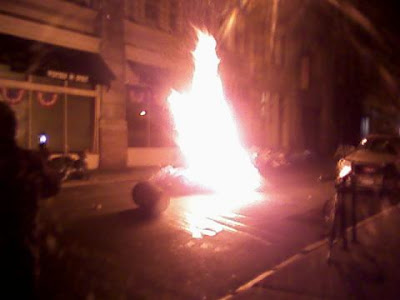 New York, New York, U.S. - A Friday night concert organized to raise funds for anarchist eco-prisoners and the Earth First! Journal was broken up by police after about five hours and a number of noise complaints. Concert goers left the venue on Walker Street and proceeded to construct a makeshift barricade near the intersection of Walker and Broadway out of disregarded Christmas trees and garbage and then lit it on fire. Firefighters soon extinguished the blaze and the crowd dissipated before police could make any arrests. One organizer who was not involved in the disturbance was briefly detained back at the venue but does not expect to be charged with anything.