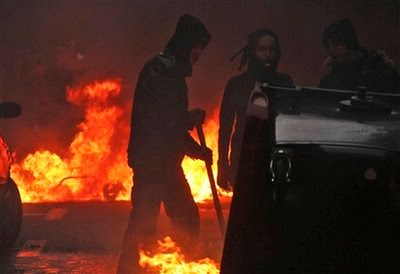 Athens, Greece - Hundreds of anarchists broke away from a larger central Athens rally in of protest education reforms and attacked police and property Friday. Demonstrators chanted "These are the government's last days" as they marched and led many to wonder if Greece would see a resurgence of the violent protests that spread throughout the country in the weeks before Christmas. Widespread rioting in December was sparked by the fatal police shooting of a youth and caused a reported billions in damages to property in the capital alone.

Earlier in the week a riot police officer was machine gunned down by a suspected member of Revolutionary Struggle an armed far left-wing group that fired a missle at the U.S. Embassy back in 2007. The 21-year-old police officer is in critical condition and his injury has generated a significant degree of sympathy amongst the more conservative elements of the country's population.