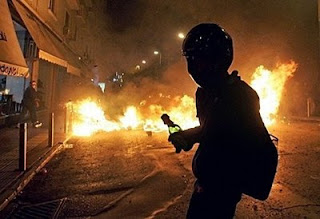 Greece - Riots and destruction envelope Greece as anger over the police killing of a 15-year-old anarchist boy is expressed. Alexandros Grigoropoulos was fatally shot three times by police as he allegedly hurled projectiles at them in the Eksarhia district of Athens. The shooting sparked a spontaneous uproar as an estimated 10,000 anarchists and their sympathizers took on police and set fire to businesses in cities across the country. Rioting continued unabated for a second night and is expected to continue on Tuesday when a general strike is planned. 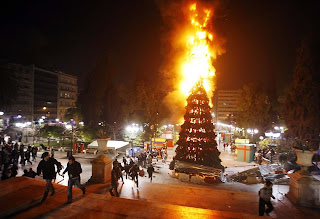 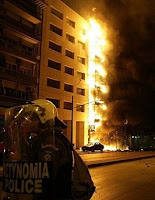 The huge Christmass tree outside parliament and the six-story Eurobank building burn.

Rioters in Athens sang and posed for pictures as they set fire to a giant public Christmas tree and hundreds more businesses. Dozens of stores including a shop that sold hunting weapons and swords was looted. Even the tourist islands of Crete and Corfu were not sparred by the destruction and unrest. 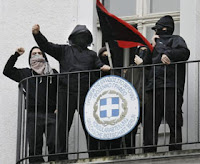 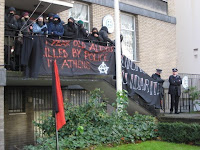 Solidarity protests in London and Berlin targeted Greek embassies and consulates. In Berlin anarchists occupied the consulate and in London the Greek flag was taken down and replaced with a red and black anarchist one.