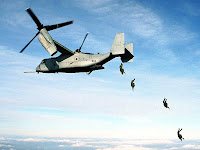 Ridley Park, Pennsylvania, U.S. - Sabotage shut down assembly lines at a Philadelphia area Boeing aircraft plant that produces military hardware. A foreign object was found lodged in the fuel line of a V-22 Osprey fuselage on Friday. Workers were instructed to show up to work as usual on Saturday by their machines remained silent as investigators attempted to discover who was responsible for the damage and if any other aircraft had been tampered with.

The incident was the second to cause concern at the plant this year. Last May a disgruntled worker snipped wires in two CH-47 Chinook Helicopters at the same facility. The plant was last silenced in September when 1400 workers walked off the job to pressure the plant managers to agree to a new contract. After a week a contract was signed but presumably all of the workers were not pleased by it.