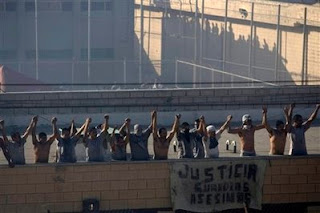 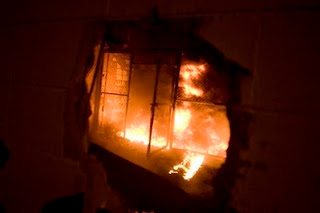 Tijuana, Mexico - Inmates of La Mesa state prison seized control of the facility Sunday afternoon after a 19-year-old prisoner was allegedly murdered by guards, during a mid-day search for contraband. Rioting broke out shortly there after while 1,200 visitors were in the prison. About 600 of the visitors were trapped inside as federal police surrounded the compound. 3 Prisoners were killed, and another 25 seriously injured during the unrest.

Inmates took 8 prison officials hostage and burned down many prison buildings. Three prisoners attempted to escape during the confusion but were quickly recaptured. Masked inmates hung a banner from the roof of one of the prison buildings that read in Spanish 'Justice. Guards. Assassins.' Prison guard Alex Cervantes Jaramillo was arrested, and police are looking for the prison's top commander Marco Antonio Ibarra Chavez, and his lieutenant, Daniel Ibarra Perez in connection to the murder of inmate Israel Marquez Blanco.

It took joint force of federal soldiers and riot police 12 hours to free the hostages and regain control of the facility which continued to burn into the night. Much of the prison was destroyed by the fires.