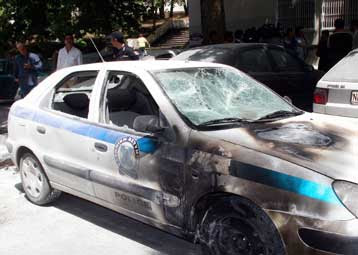 Thessaloniki, Greece - A group of about 15 masked and hooded anarchists attacked the Dimokratias square police station early this morning with fire bombs, gas canisters, and stones. Two police patrol cars and four motorbikes suffered extensive damage. At least one car and 15 motorbikes also parked at the station were damaged in the attack as did the building itself. Following the destruction the anarchists rose away on their own motorbikes.

The organization behind the assault Cells of Fire told the press that the action had been taken in support of two anarchists who had been arrested last month on suspicion of involvement in the abduction of Thessaloniki industrialist Giorgos Mylonas. Authorities say that the case exposes ties between anarchists groups and organized crime.