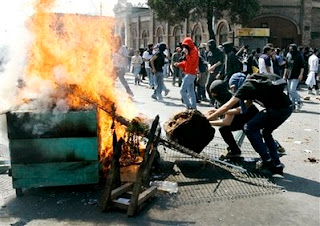 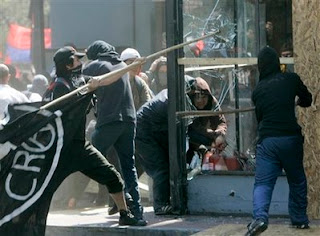 Santiago, Chile - A march in memory of the victims of the Pinochet regime ended in riots as the country of observes the 35th anniversary of his assent to power. Anarchists looted and vandalized shops including a gas station, and set fire to traffic signals and public garbage cans that were then left in the streets. Riot police with a water cannon engaged the mob who fought back with rocks, bottles, and molotov cocktails. Protesters also burned American flags, some of them homemade, to highlight the C.I.A.'s role in propping up the Pinochet regime. Thousands took part in the demonstration yesterday, 19 of whom were arrested by police.