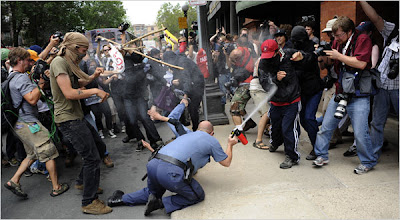 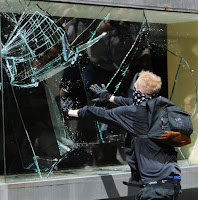 Saint Paul, Minnesota - Last night four days of anti-government protest concluded with the mass arrest of nearly 400 demonstrators, journalists and bystanders outside the Republican National Convention. The protests opened Monday with an roving anarchist march that clashed with police and left a trail of smashed storefront windows, overturned dumpsters, and trashed police cars in it's wake. One patriotic vigilante who attempted to intervene was beaten by masked anarchists. Fewer than five people were arrested before the black-clad masked anarchists "seemingly disappeared."

Police attempted to intimidate protests by preemptively arresting anarchist organizers and raiding their homes and a protest welcome / convergence center. Law enforcement officers and their informants also infiltrated activist groups and spaces more than a year prior to the convention. Eight of the arrested organizers affiliated with the RNC Welcoming Committee now face conspiracy charges under Minnesota's Patriot Act. If Convicted individuals could face up to almost eight years in prison. 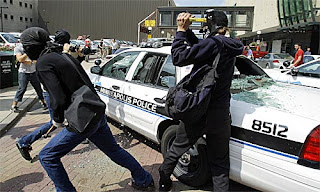 On the streets thousands of National Guard troops and police Some of whom came from as far away as Texas, Arizona, New York, Florida, and California used teargas, tasers, rubber bullets, batons, and pepper spray on demonstrators. Allegations have surfaced that police tortured some individuals after they were arrested. In all 816 people were arrested around the convention. (video)