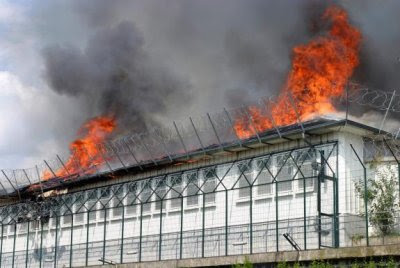 Paris, France - Detained immigrants burned down two buildings at the Vincennes detention center, after the death of a 41-year-old Tunisian migrant Saturday. Fourteen migrants were able to escape during the chaos.

Guards claim that the migrant who died had a heart attack while he was alone in his cell, but authorities have promised to investigate the matter following the uprising. Twenty migrants were hospitalized for smoke inhalation following the fire, but none of the cases were reported to be serious.

Detainees at the center, most of whom are of African origin and many of whom have fled former French and other European colonies, are not accused of committing any criminal offenses but are only being held for lacking EU documents.

The Vincennes center was the largest in the country. There is no word yet as to whether or not it with be rebuilt.