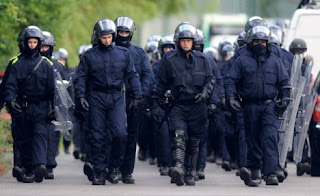 Kidlington, Oxfordshire, England - Detainees rioted Friday at the Campsfield House Immigration Removal Centre for the second time this year. Inmates started fires in the facility before making their way to and attacking the perimeter fence, but they were unable to break through it.

Authorities attempting to control the situation sent in a special prison riot control unit, known as the Tornado Team, which was made up of 50 officers outfitted with specialized gear. Some of the officers also brought attack dogs. Firefighters, along with 15 trucks, were unable to extinguish the blaze for two hours.

The privately owned center has faced constant opposition from community and human rights groups, as well as a generous share of controversy. Another incident in which fires were set last August led to a successful jailbreak for 26 asylum seekers.