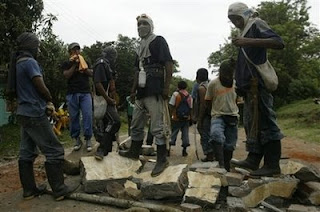 Caloto, Cauca Department, Colombia - The Nasa (also known as Paez) Indians of Colombia's southern state of Cauca are holding off state police with one hand and Marxist guerrillas from the FARC with the other. The Indians are armed only with machetes, slingshots, stones and sticks. They have thrown up barricades across key roads to an area they are claiming as their ancestral lands.

The Colombian state agreed to respect the Nasa peoples' claims to more than 545,000 acres of their traditional land after the massacre of El Nilo. Outrage grew following the 1991 incident in which paramilitaries aligned with the National Police brutally murdered 20 indigenous community members. Among the victims were 11 men, 5 women and 4 children. The promise that reparations would be given to survivors and the larger community didn't come until the end of President Ernesto Samper term in 1998.

The Nasa only waited so long for the government to make good on their promises. On October 12-Columbus Day 2005 they began seizing farms and non-violently pushing both left and right-wing militants off their lands. A 16-year-old indigenous activist was killed during the actions. Though things were relatively quiet in the area for a while, tensions have once again been growing in recent months. In mid-April FARC militants attacked a police station in the town of Toribío, which is located in Nasa territory, bringing increased federal attention back to the area. 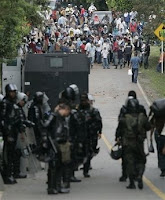 Since then, Nasa land activists have taken the offensive. Hundreds of poor indigenous landless people have participated in land seizures. The state responded by sending in ESMAD anti-riot-police corps to put down the uprising and end the land appropriations. Having failed, the police are now locked in a stand-off with the activists.

Mama Kiwe, or Mother Earth, is sacred to the Nasa who have a land-based spirituality. Geovanny Yule, a leader in the 2005 land seizures, explained then that, "what we want is to liberate the Mother Earth, Mama Kiwe, from this cycle of accumulating wealth by squeezing and killing the earth which gives us life.”