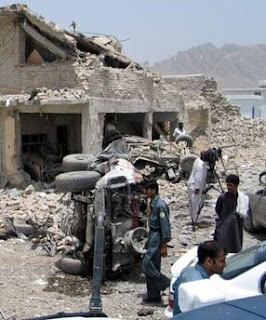 Kandahar, Afghanistan - A Taliban insurgent attack on Sarposa Prison partially destroyed the facility and liberated a reported 1,100 inmates, both men and women. Conflicting government statements have said that either a handful or zero detainees remained. About 380 of the those freed were Taliban militants, but many were social prisoners. At least 15 guards and an unknown number of police, prisoners and insurgents were killed during the assault.

In May, around 200 Taliban suspects participated in a hunger strike including 47 who sewed their mouths shut. The protest concluded a week after it began, when a parliamentary delegation pledged to review their cases.

The jailbreak began with a car bomb attack on the prison's main gate after nightfall around 9:30 PM Friday. Another explosion occurred at a rear wall of the facility and the sky was lit up by a barrage of rockets before militants stormed the compound with small arms. Minibuses were parked in the area to quickly evacuate the freed prisoners from the area, which is now being closely scrutinized by foreign troops.