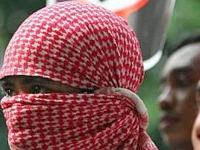 Banda Aceh, Indonesia - A Sharia police patrol car was destroyed in a firebomb attack by at least four individuals. It was the first reported incident of it's kind targeting police who enforce Islamic religious laws in the country.

"The attack is a sign of resistance by the population against Sharia laws, that are unfair in Aceh," said Fuad Mardhatillah, a religion and philosophy professor at the Islamic State Institute Ar-Raniry. Sharia police routinely arrest women who wear clothing deemed 'inappropriate,' unmarried couples seen together in public, as well as those suspected of gambling, consumption of alcohol or other drugs and sexual promiscuity. The federal government began allowing the largely Muslim province of Aceh to practice Sharia law in 1999.