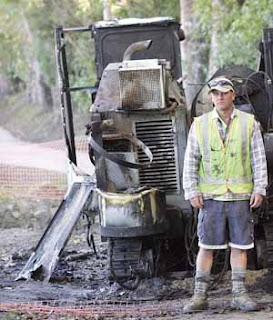 Palmerston North, Manawatu-Wanganui, New Zealand - Vandals stalled construction in the Manawatu River watershed by torching a $750,000 drilling machine. Multimillion-dollar construction projects have have sparked heated battles between current residents, environmental advocates and developers. While above ground eco-groups attempt to slog out compromises in the courts, clandestine saboteurs have been costing the construction industry millions in additional expenses each year. According to Malcolm Abernethy, a technical adviser with the Contractors' Federation, small acts of arson and vandalism are a serious threat to industrial progress. "Every night something probably happens, but it's not always reported."

The burned machinery was owned by Blackley Construction and was the only one of its kind in the country. Blackley Construction operations manager Kevin Bush said the drill was an integral piece of equipment and the incident would probably trigger a change in the company's protocols. Additional expenses would likely include increased security transporting valuable heavy equipment back and forth from job sites twice a day. "We get hit about once a month I'd say. Not this big, but generally something will be targeted," Mr Bush said.

Similar acts of vandalism and sabotage in the U.S. are seen as deadly, serious acts of terrorism. Federal law enforcement has made the disruption and apprehension of underground eco-groups like the Earth Liberation Front a greater priority than right-wing groups with a history of indiscriminate bombings, lynchings and assassinations. Environmentally motivated vandalism, while it has yet to have even injured a single person, was ranked by the FBI as "the No. 1 domestic terrorism threat" in 2005. The Ku Klux Klan, neo-Nazis and anti-abortion fanatics were bafflingly not ranked as serious threats. Eco-saboteurs have as of yet not injured a single person, while Christian anti-abortion terrorists have murdered nearly a dozen people and maimed more than 100 in the U.S. alone. Environmentalists who are apprehended routinely face lifelong prison sentences for their actions.