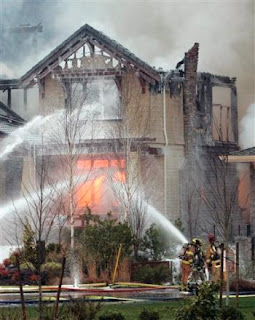 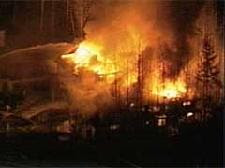 Woodinville, Washington, U.S. - Built Green? Nope black! read a banner left at the site of a $7 million arson that destroyed 3 "McMansions" and damaged two others. The note was a pink sheet signed with the letters "ELF" for Earth Liberation Front. According to police, the fires began with loud explosions around 5 AM this morning.

Federal authorities have investigated and failed to make any arrests in at least four similar cases in which the ELF took credit for burning trophy homes in eastern Washington.

The homes targeted today were model homes that were promoted as environmentally friendly constructions in this rural area north of Seattle. They were located on, "The Street of Dreams."