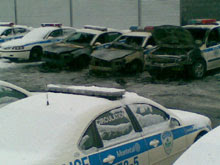 Montréal, Québec, Canada - A group calling itself Collectif Ton Père (Your Father Collective) has claimed credit for torching six police cars last Friday in the Hochelaga Maisonneuve area. They seem to be related to another group that smashed and burned three ATMs belonging to the National Bank in Montreal. The second action was claimed by Collectif Ton Oncle (Your Uncle Collective.) Each group issued statements that were posted to anti-capitalist websites.

Both communiqués outlined their motives as being anti-state or anti-authoritarian and expressed solidarity with "Native struggles." The first statement called on others to take actions against capitalists by setting, "fire to their cars, SUVs, police cars, their new real estate developments, their big houses, their hotels."