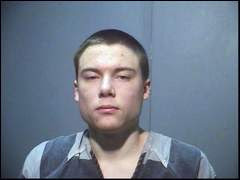 Lambertville, Michigan, U.S. - Police say that 17-year-old Michael Sykes torched two newly constructed homes in order to call attention to the problem of urban sprawl. The teen was arrested as he allegedly attempted to siphon gasoline from an unmarked police Jeep Cherokee near a new development. Detectives say that Sykes confessed to the arsons along with another at a Kroger supermarket in 2006, as well as a recent string of acts of vandalism including burning an American flag, damaging an 80-foot utility pole and painting an anarchy symbol.

Sykes was charged as an adult, and has pled not guilty. He is being held in Monroe County Jail in lieu of $1 million bond. His next hearing is scheduled for March 26.