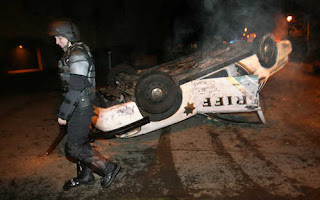 Olympia, Washington, U.S. - A hip-hop concert, featuring the revolutionary emcee duo Dead Prez, ended in a riot that saw tens of thousands of dollars in damaged and stolen police property. The incident began when a campus police officer arrested a suspect on misdemeanor assault charges. The show had ended but the performers, still onstage, allegedly egged on the crowd saying, “They’re taking one of our people. Go take care of it.”

A crowd of maybe two dozen concert-goers surrounded the police car, forcing them to release the arrested individual. The arresting officer and her backup were unable to start her patrol car, and hastily abandoned it as the crowd swelled to 200 strong. Rioters smashed in the cruiser's windows, graffitied the car and looted its contents, which included a laptop and radar gun before flipping the car over. Officers in riot gear later arrived on the scene and were greeted with a hail of bottles and rocks. More police cars were damaged ,but less seriously than the first. Police made no arrests, but said that they hope to find DNA on the destroyed cruiser that will lead them to suspects.