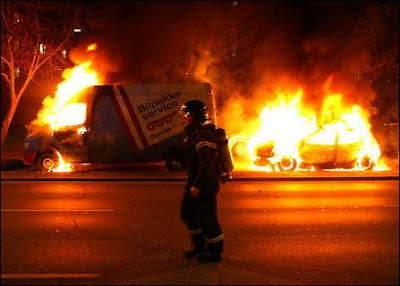 Denmark - The night air of Denmark's major cities has been full of smoke and fire for the past six consecutive nights. Immigrant youth are believed to be behind the destruction in response to racist police harassment. Police have long since enforced selective "zero tolerance policies" in poor immigrant neighborhoods and declared "visitation zones"-- special areas of cities where civil liberties are temporarily suspended. The incident sparking the unrest was the police beating of an elderly immigrant man and his sons last Saturday.

Cars and dumpsters have been the main targets for the arsonists, but in the last days several schools have also come under attack. At least one school was burned to the ground. Rioters seem to be avoiding direct conflict with the police, but are using hit-and-run tactics similar to classic insurgent strategy. On several occasions, however, police and fire fighters have been met with rocks and bottles when approaching fires or large groups of youths.

A social worker from an area most most affected by the violence said, "This is the fire that the police have built. They have been on a constant course of confrontation with the youths, so it's no wonder that it comes to this." The disturbances have loud echoes to immigrant youth rioting in France that followed incidents of police brutality there. In November of 2005, months of anti-state unrest eventually spread from France's immigrant communities throughout Europe as far as Greece and Denmark.

Initially the disturbances were confined to Copenhagen, but have since broken out in more than 15 Danish cities. Last night alone, in the capital, 28 cars and even more garbage containers were burned.