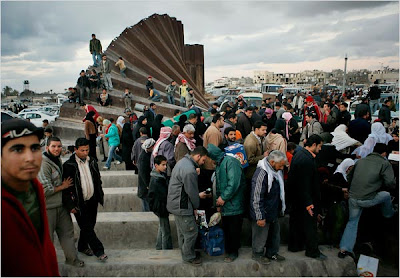 Rafah, Gaza, Palestine - Israel has had Gaza under siege since the hostile Hamas led government was elected last July, but all that changed early Wednesday morning when militants demolished approximately half of a seven mile section of border wall. Hundreds of thousands of Gaza residents swarmed across the remains of the border fence into Egypt. Egyptian border guards largely stood by helpless to do anything but have been massing and now plan to once again use force to lock down the border.

Palestinian liberation fighters were allegedly quietly cutting at and weakening the border barrier for months before it was blasted at 3 AM Wednesday morning. Hamas police kept crowds away from the border, following the explosions, for three hours until the sun was up. By sunrise the crowds were so thick and determined that the few Egyptian border guards on hand were impotent to hold them back.

The situation in the Gaza Strip had grown dire since Israel closed down the borders last summer. Power outages and rampant shortages of food, medical supplies and other necessities have thrown the territory into a humanitarian crisis, though much of that pressure has been greatly lessened as goods and supplies flow into the region from Egypt.

Renegade members of the militant al-Aqsa Martyrs Brigades carried out a similar but less ambitious action just over two years ago, when they used a commandeered bulldozer to destroy a portion of the same barrier. Gaza is home to 1.5 million people, and is considered by many to be the worlds largest open air prison.