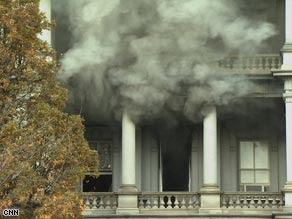 Washington, DC U.S. - Firefighters responded to a two alarm fire that forced the evacuation of a White House building. The blaze ignited shortly after 9 am, near Vice President Cheney's office in the Eisenhower Executive Office Building next door to the White House. The cause of the fire has yet to be determined, but is said to have started in an electrical fire adjacent to the vice president's office. The office was left under water after firefighters doused the blaze.