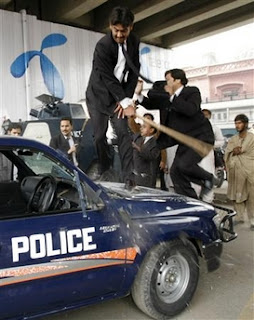 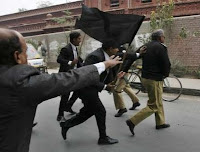 Pakistan - Lawyers and students in major cities walked out of courthouses and classrooms across the country and took to the streets to protest the anti-democratic crackdowns of the U.S. backed Pervez Musharraf regime. Suited lawyers clashed with police and trashed at least one police car in the capitol, Islamabad, yesterday. In Multan, lawyers broke through police cordons in confrontations that left ten injured. Students carried anti-government placards that proclaimed “no to dictatorship,” “restore the constitution,” and "reinstate the deposed judges.”

The judges in question were fired by Musharraf so as to eliminate judicial challenges to his regime. Currently the country is under conditions of emergency rule and independent media outlets have been silenced.