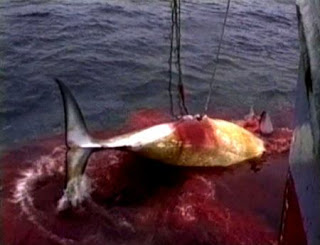 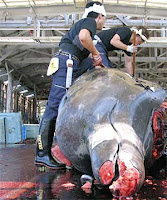 Melbourne, Australia - Ten protesters splashed fake blood inside the Japanese consulate to call attention to Japan's plan to begin hunting endangered whales in the Southern Ocean. Four Japanese vessels are currently en route to the whale's feeding grounds where they plan to slaughter 935 minke whales and 50 fin whales in defiance of international law and treaties. The whalers claim that the hunt is necessary for scientific purposes despite the fact that the meat is eventually brought to market.

The anti-whaling campaigners who vandalized the consulate are part of the group Animal Liberation Victoria. Security removed them from the consulate which is located on the 45th floor of a city center building. Police have decided not to press charges against the activists.