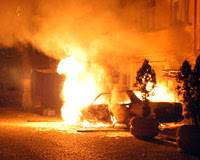 Istanbul, Turkey - Masked arsonists torched five police vehicles Wednesday night, in the western İstanbul neighborhood of Halkalı. The cars, which were privately owned by police officers, were completely destroyed. Five other cars were set alight but were only partially damaged. Those automobile were said to not belong to police officers. Investigators believed that molotov cocktails were used to ignite the blazes. More than fifty vehicles have been burned in the country in the past 18 days. Authorities believe that supporters of the Kurdish separatist Kurdistan Workers' Party (PKK) are responsible.