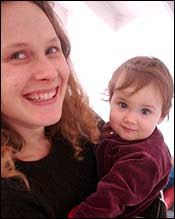 Waters, 32, of Berkeley, California, is a violin teacher and the mother of small child. She was arrested in early 2006 as part of the FBI's Operation Backfire. Prosecutors say that she acted as a lookout for four individuals who started a fire, at University of Washington research facility, in 2001. The action was claimed in the name of the ELF.

As for the four individuals prosecutors claim actually started the fire - two, Jennifer Kolar and Lacey Phillabaum, have been co-operating with investigators and aiding their efforts to indict others since late 2005 and early 2006. Bill "Avalon" Rodgers took his own life in an Arizona jail shortly after his arrest and Justin Solondz has yet to be arrested and is believed to be out of the country. The FBI considers Solondz a "fugitive from justice."

Waters faces a mandatory minimum sentence of 35 years in federal prison, if convicted of all charges. Her lawyer claims that the report from a December, 2005 FBI interview with co-operating government witness Jennifer Kolar was doctored to include Water's name, when it initially did not. He also says that evidence of his client's innocence was suppressed. A trial date is currently set for February 4th.