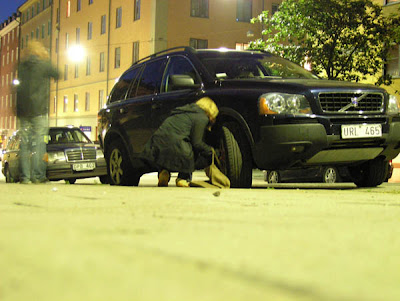 Stockholm, Sweden - A new group calling itself The Indians of the Concrete Jungle has claimed credit for vandalizing more than one-thousand SUVs in order to draw attention to climate change and discourage motorists from driving vehicles that create such a high impact on the environment. The group first made itself known through actions followed by press releases in the nation's capital, but now say that other "tribes" have taken up the cause and employed similar tactics in the cities of Gothenburg, Malmö and Sundsvall.

Ten large fuel inefficient automobiles were sabotaged between Monday night and Tuesday morning in the Fredhäll area. Each SUV had it's tires deflated and notes affixed to their windshields saying that "This does not have to happen if we impose a radical cut on carbon emissions. Now. Not tomorrow. That’s why we have disarmed your SUV by deflating the tires."

"If selective SUV-disarmament is done repeatedly and on a massive scale, it will develop from a slight annoyance in the eyes of the owners into a real obstacle for driving the things, thus putting an end to perhaps the most obnoxious aspect of bourgeois carbon addiction," claimed a statement on the saboteurs website.