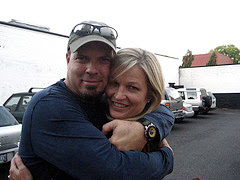 Jonathan Paul and his wife

Phoenix, Arizona, U.S. - Convicted Animal Liberationist and eco-activist Jonathan Paul reported to prison Wednesday afternoon to begin a more than four year sentence for destroying a horse slaughter house and meat packing plant in Redmond, Oregon, in 1997. Paul helped to ignite a fire that caused an estimated $1 million in damages. The plant, which was slaughtering as many as 500 horses per week, was never rebuilt and no one was injured during the course of action.

Paul has been a committed activist since the mid-eighties and was involved in some of the earliest high profile Animal Liberation Front actions in the US. He was indicted in January 2006 along with more than a dozen others who committed similar acts of conscious between 1997 and 2001 in the Pacific Northwest. Paul was one of the few who chose not to cooperated with the government and implicate other activists.

He was accompanied by family members as he reported to prison over a thousand miles from his home. He told them as he made his goodbyes "this is way bigger than us, this is for the animals and the planet, we will never suffer as much as they do." Paul's supporters have asked that people send Jonathan letters of support to ease his entry into the prison system.