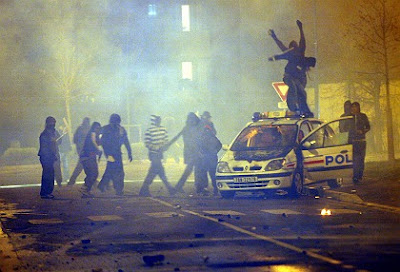 France – More than 80 police officers were injured, five of whom are in critical condition, after two nights of anti-police rioting in the Parisian suburb of Villiers-le-Bel. Now authorities are trying to cope with a third consecutive night of unrest. Trouble broke out following the death of two youths who died in a automobile accident with a police car. The two were riding a motor-bike at the time and police fled the scene of the wreck. By the second night, violence had spread to 6 more towns in the Parisian suburbs and has now flared up in the southern city of Toulouse.

Rioters threw stones, fireworks, petrol bombs, and even shot fire arms at police. A Villiers-le-Bel police station was set fire to, and another one in near by Arnouville was trashed. Scores of riot police have been deployed to restore order and protect property. They have used tear gas, rubber bullets and clubs against rioters.

It wouldn't be surprising if rioting continued for a number of weeks, or even months after taking into account the history of similar conflicts in the poor outer perimeters of France's urban centers. In 2005, the accidental deaths of two youths fleeing police in the suburb of Clichy-sous-Bois sparked two months of intense rioting primarily involving disaffected unemployed immigrant youths. Then like now, violence quickly spread to other parts of France and even reached other urban centers in Belgium, Germany, the Netherlands, Spain, Portugal, Denmark, and Greece.

Last year some similar flare ups took place but failed to spread with the intensity and determination of 2005's unrest. This years clashes have been characterized as something more akin to guerrilla warfare than the protest riots of the previous years. "It's different, there's much more violence," said Christophe, a 30-year-old police officer on duty at Villers-le-Bel and during the 2005 riots. "Back then, it was more of a revolt. This time, they're after us and they're armed."

Gilles Wiart of the police union said he did not believe it was an "ethnic problem." "Most of all it is youths who reject all state authority. They attack firefighters, everything that represents the state."