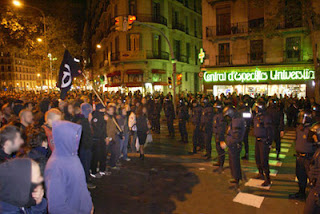 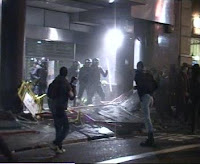 Spain - Barcelona Police attempts to disperse an anti-fascist sparked rioting, numerous acts of vandalism as well as violence against the police themselves. Saturday's demonstration had been called to honor the memory of 16-year-old anti-fascist activist Carlos Javier who was fatally stabbed by an off duty soldier and neo-Nazi in Madrid last week.

Rioters lit garbage bins on fire and attacked the headquarters of the regional interior affairs department. Similar demonstrations were also held in the capital and also ended in violence. In Barcelona 10 Police officers were injured and seven protesters were arrested.

Fascists also gathered over the weekend to pay tribute to the late dictator José Antonio Primo de Rivera. Primo de Rivera was a supporter of General Francisco Franco's 1936 coup to overthrow Spain's democratically elected government and place himself as the supreme leader of the country. The coup preceded a bloody civil war which ultimately saw Franco's forces victorious, but Primo de Rivera was captured and executed by the anti-fascist Popular Front for treason.

Hundreds gathered at his tomb in Madrid Sunday to mark the 71st anniversary of the his death which falls on Tuesday the 20th. The crowds sang fascist hymns and the and gave the stiff armed fascist salute. Many carried banners bearing the Cross of St James, known as Matamoros (Moorslayer), pre-democratic Spanish flags, and other fascist symbols, all of which may be banned symbols by the time next years anniversary rolls around if any newly proposed law is passed. Germany has has laws banning fascist symbols from it's own history.

Spanish police estimate that there are 10,000 neo-Nazis in Spain, and that their numbers have remained relatively constant in recent years. However, NGOs who monitor racist violence have reported a spike in neo-Nazi activity recently.