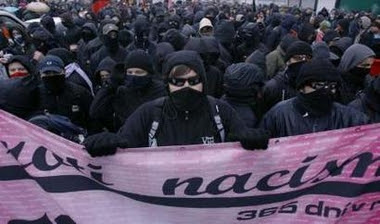 Prague, Czech Republic - The fact that authorities declared their march illegal didn't stop scores of neo-Nazis from showing up a day after the 69th anniversary of the Third Reich first major anti-Jewish pogrom. About three times as many militant anti-fascists decided to show up as well in order to make certain that the Young National Democrats (a front group for the National Resistance) were unable to execute their planned commemorative tribute. The ultra-nationalists had announced that their demonstration would go through Prague's through the historical Jewish quarter which was ransacked in 1938 during a coordinated Nazi offensive known as the Kristallnacht (Crystal Night) or the Night of Broken Glass.

More than 1,500 armed police officers were on duty through out the city center to break-up any unauthorized demonstrations and maintain order. Anti-fascists were however successful in beating and bloodying more than a dozen of the neo-Nazis who gathered. One fascist is reported to have fired "a gas pistol into the crowd and lightly injured one person." After which point "anarchists attacked and beat him up."

One counter protester Alena Hladkova, 33, explained the reason why many anti-fascist militants believe it is necessary to meet neo-Nazis with violence. "In the 1930s nobody in Europe took these small bands of fascists seriously and look what happened."

Police, who left wing radicals accuse of being sympathetic to fascists, arrested between 200 and 300 people mostly counter-protesters on weapons charges. At least six people were injured and required medical treatment including one police officer who suffered a head injury.