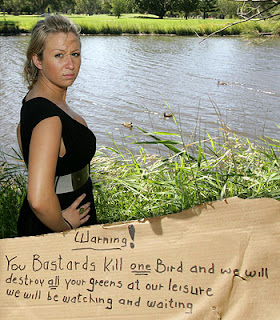 Sydney, Australia - Vandals visited the Warringah Golf Club over the weekend and during the night wrecked extensive damage on four putting greens and dug holes in three others. The anonymous visitors were clear about why they caused the damage they did. "Warning!: you bastards kill one bird and we will destroy all your greens at our leisure. We will be watching and waiting" read a note on a piece of cardboard that was stuffed into one of the holes.

Animal rights advocates and neighbors have been in an uproar since the club hired a marksman to shoot native wood ducks who land on the course. The ducks are considered by the golfers to be a nuisance because the make small holes in the turf as they forage for food. The club and some employees have been inundated with phone calls and emails since the shooter was hired.