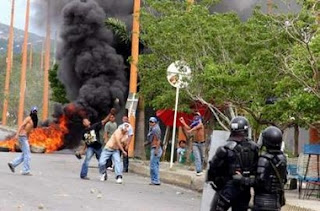 Villa del Rosario, Táchira, Colombia - Protesters most of whom work as commercial truck drivers have barricaded and shut down a number of roads that cross the border after the Colombian government instituted a new toll charge for crossing the border. Demonstrations were reported to be peaceful until Colombian riot units attempted to disperse them on Monday, by firing teargas into the crowds sparking violent confrontations. Rioters overturned and burned at least five cars and vowed to keep the crossings closed until the new border controls were lifted. At least three police officers and four civilians were injured during the confrontations.