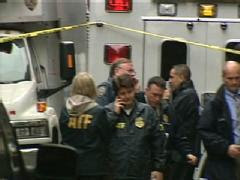 ATF and NYPD Bomb Squad on the scene this morning

New York, New York, U.S. - Early this morning explosives rocked the Mexican Consulate shattering windows and waking neighbors, nearly one year to the day since gunmen sympathetic to the Mexican ruling party assassinated anarchist activist and American independent journalist Brad Will. The murder of Brad Will sparked weeks of protest in his home of New York City. Demonstrators occasionally got unruly and left the Mexican Consulate on East 39th Street damaged.

NYPD detectives have reviewed surveillance cameras from the area and believe that a lone man in his 20s hurled two small home made grenade-like explosive devices at the consulate building around 3:30 am this morning and left the scene on a bicycle. The attack has been compared to a 2005 attack at the British Consulate. Windows were broken but no one was injured in either incident nor have police made any arrests or named any suspects but at least one local anarchist was questioned by the FBI in connection with the 2005 bombing.

Though the early morning explosions were heard by a number of nearby residents police were not called until more than five hours later when consulate workers arrived to discover the broken windows on the building's first and second floors. The building will remain closed throughout the weekend. 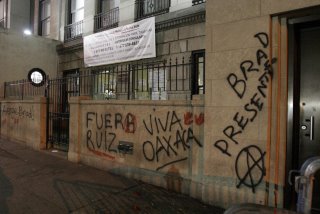 Slain activist Brad Will, the consulate after a protest last year


Friends and family of Will are planning on gathering tomorrow afternoon at St. Mark's Church to hold a memorial in his memory.