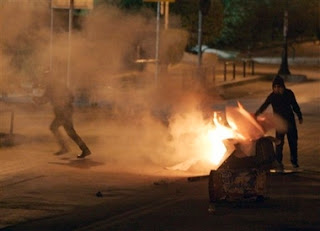 Thessaloníki, Greece - Large marches and violent clashes between anarchists and police marred conservative Prime Minister Costas Karamanli's annual state of the nation's economy address in the run up to the September 16th general election Sunday. Prior to Karamanli's speech around 5,000 people marched around the city without incident.

A few hours after the address was concluded masked rioters blocked roadways with burning barricades and attacked riot police with molotov cocktails in the area around Aristotelio University. Police pursued a female suspect onto university grounds despite the fact that they are legally barred from entering the campus unless they are invited by the administration. The city's top prosecutor is thought to have given police the go ahead to ignore the law in his efforts to crackdown on home-made explosives. One police officer was injured and a woman was arrested.