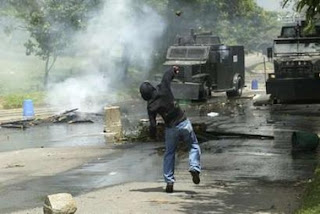 Colombia - Public university students and teachers have been absent from classes since they walked out of school on the eve of a May 23rd nation-wide general strike that was observed by hundreds of thousands of people opposed to the government's ongoing Free Trade Agreement negotiations and related economic reforms. President Alvaro Uribe has been pushing for pro-business neoliberal style economic reforms that include privatizing state run institutions like public funded universities. Last year Uribe helped to successfully transfer Atlantic University to private investors and is planning to do the same with the country's other public schools of higher education.

Demonstrations against the privatization scheme merged with last week's local protests against the G8 meetings, which were held in Germany, growing larger in number and displaying a renewed energy. The largest street protests were held in the cities of Bogota, Medellin, Bucaramanga and Cali. In Medellin rock-throwing students clashed with riot police who responded with teargas and water cannons. The opposition to Uribe and the neoliberal policies he has been backing is very large and well organized and is not likely to disappear anytime soon.