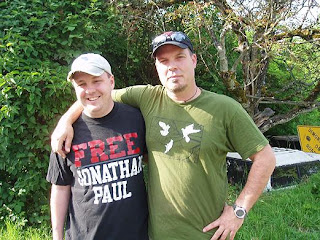 Eugene, Oregon, U.S. - U.S. District Judge Ann Aiken sentenced admitted Animal Liberation Front (ALF) arsonist Jonathan Paul to more than four years in prison for his role in a fire that destroyed a horse slaughterhouse in 1997. Paul's lawyers objected to the way in which the sentence was calculated and said that it should be shorter. Judge Aiken was unsure what to do and asked both sides to submit briefs on the matter before she makes a final decision on the matter.

Paul assisted other individuals, whom he would not identify, in destroying the Cavel West horse slaughterhouse in Redmond, Oregon. Government witnesses have identified the other saboteurs as cooperating witnesses Jacob Ferguson, Kevin Tubbs, Jennifer Kolar and Joseph Dibee who has not been located and is listed as a fugitive. The slaughterhouse was never rebuilt.

Paul, 41, agreed along with three out of nine co-defendants to plead guilty in exchange for a reduced sentence and was allowed to do so without providing the government with information about his accomplices. He did agree to provide authorities with an account of all of the major crimes he committed including numerous ALF raids to rescue animals and a few which involved arson.

According to a tearful and regretful court statement Paul decided that arson was too dangerous for emergency responders like his sister, Caroline Paul, the first female firefighter in the city of San Francisco, and vowed never to take part in another action that employed arson. Since 1999 Jonathan Paul has worked as a volunteer firefighter and emergency medical technician, but will not be allowed to do so in the future as a result of his criminal history.