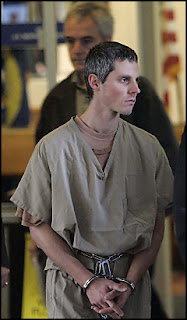 Eugene, Oregon, U.S. - The first of ten convicted eco-saboteurs was sentenced yesterday to 13 years in prison with a terrorism enhancement. Stanislas Meyerhoff was a key witness in the government's case and the first of his co-defendants to begin cooperating and assist in the arrests and prosecution of others involved with the Earth Liberation Front and the Animal Liberation Front primarily in the Pacific Northwest between 1996 and 2001. U.S. District Judge Ann Aiken told him that "for a very long time you've been an evil boy," but commended him by “doing the right thing” by confessing and assisting the government in their prosecution of others.

Much of the two day sentencing was taken up by discussion about how Meyerhoff's reputation of a snitch greatly increases his chances of being both physically and sexually assaulted in prison and that he has allegedly already been the target of other inmates who have attacked him and threatened him on a daily basis.

Meyhoff's status as a terrorist is also likely to make his time in prison much more difficult. Judge Aiken applied the terrorism enhancement for the arsons at Romania Chevrolet, Jefferson Poplar Farm, and the Eugene police substation. Nearly all of the other defendants were involved in at least one of those actions making it nearly certain that they will also be deemed terrorists. While receiving a terrorism enhancement could add as many as 20 years to a defendants sentence the judge is not likely to add more time than was agreed to in plea agreements.

The non-cooperating defendants Daniel McGowan, Joyanna Zacher, Nathan Block, and Jonathan Paul are due to be sentenced in the coming weeks and face at most eight years in prison each. Paul who was only convicted of one arson at a horse slaughter house in 1997 faces a maximum of five years behind bars.

Labeling activists who employ arson as an extreme form of civil-disobedience is an unprecedented move on behalf of the government which redefines what it takes to be a terrorist and makes it much easier for the Bush administration to claim that they have been effective in capturing and convicting terrorists.