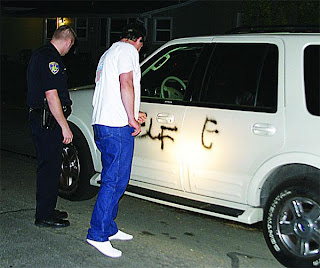 Woodland, California, U.S. - Nine large trucks and SUV's on Casa Linda Drive and Elm Street were defaced around 1:30 a.m. Sunday by suspected eco-vandals. A witness reported seeing two males and one female who appeared to be in their late teens, spray painting cars in the area with the letters "ELF." The witness told police he was following the suspects but that they fled in a vehicle near Bartlett Avenue.

The Woodland Police Department believes that the letters ELF may stand for the Earth Liberation Front (ELF). ELF is comprised of anonymous radical environmentalists that use sabotage and vandalism to target corporations that harm the environment and to draw attention to issues like global warming. They have consistently damaged SUV's (usually ones owned by dealerships) in order to call attention to the large amount of pollutants they create and their poor fuel efficiency.