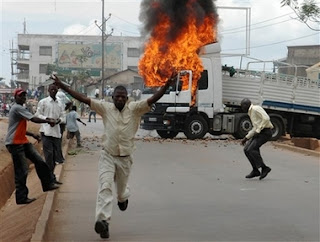 Kampala, Uganda - Environmental demonstrations turned into deadly riots as protesters destroyed property, looted shops and attacked ethnic Asians. The violence was sparked by plans of the Ugandan government and the Indian Mehta Group to clear large swaths of the Mabira Rain Forest Reserve in order to expand sugar plantations.

Two ethnic Asians unconnected to the Indian company were stoned to death by rioters and an alleged looter and a passerby were shot and killed by security officers. Rioters attacked property and burned a sugar transport truck. One protester held a sign that read: "ONE TREE CUT, 5 INDIANS DEAD!"

The plans to expand the sugar plantations would destroy 17,000 acres or 7,000 hectares of rain forest. That is nearly a third of the Mabira Rain Forest Reserve. The reserve is home to 50 species of monkeys, along with bird and plant species only found in Mabira. Uganda's President Yoweri Museveni spoke of "the future of Africa" when he reiterated his support for the development following the violence.