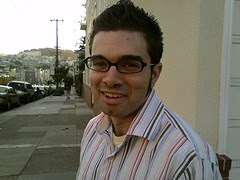 San Francisco, California, U.S. - Freelance journalist Josh Wolf is scheduled to be freed today after spending nearly 7 1/2 months in prison for refusing to obey a grand jury subpoena to turn over unpublished footage of an anarchist organized San Francisco protest where a police officer was seriously injured and a squad car was damaged.

Wolf has long maintained that he did not see or capture either of those instances and that the police would like to turn journalists into surveillance cameras in the service of law enforcement. Wolf released the video today via his blog accompanied by this statement:

During the course of this saga I have repeatedly offered to allow a judge to be the arbiter over whether or not my video material has any evidentiary value. Today, you the public have the opportunity to be the judge and I am confident you will see, as I do, that there is nothing of value in this unpublished footage.

The video in fact does not appear to show anything more serious than marchers parading without a permit and some instances of disorderly conduct.

During the course of his incarceration Wolf set the record as the journalist to serve the longest time in prison, for refusing to comply with a subpoena, in U.S. history.