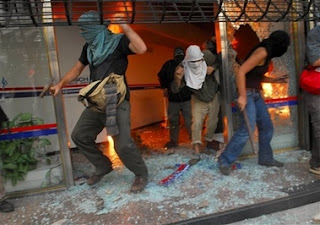 Buenos Aires, Argentina - Protesters set fire to the offices of Neuquén State governor Jorge Sobisch after state police violently attacked a demonstration of striking teachers leaving one dead. Carlos Fuentealba was was injured by an exploding teargas canister and later died. He was wounded at a several hundred person protest against police brutality, which had marred the previous day's union demonstration.

Union leaders have called on teachers to take part in a nation-wide strike on Monday. Protests like today's in Buenos Aires, have already spread far beyond the borders of Neuquén Province. In Salta teachers tried to barricade state lawmakers inside the local legislature after an unsatisfactory vote on improving teacher's salaries. Police there attacked unionists with rubber bullets.

A teacher's strike last year in the Mexican state of Oaxaca sparked an nearly six month insurrection that police eventually put down. The Mexican police were only able to crush the revolt through brutal force and overwhelming numbers. In the end more than a dozens demonstrators had been killed including the American anarchist Brad Will, who had gone to Oaxaca as a journalist.