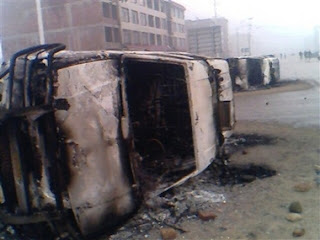 Zhushan, Hunan, China - Anti-riot security forces have suppressed massive protests in the central Chinese village were unrest broke out last Friday. Scores of anti-riot police indiscriminately attacked the crowd of 20,000 with batons and electric prods, killing one and injuring at least 60 others. The fatality was attributed to be a junior high school student who was beaten viciously by police.

The disturbance began when a bus driver accosted a passenger who he believed had not paid the full fare to transport his baggage. Many people were angry because the cost of riding buses was more than doubled last month.

By Monday a mob of protesters had surrounded the local government offices and were chanting "beat the government dogs to death." Rioters torched nine police vehicles and destroyed a number of buses. Yesterday government officials announced that they would lower the bus fares back to less than what they were before the recent increase.